Singapore and "The Mall"

So this last weekend Melanie and I decided to stay in Singapore and take a few days relaxing, which meant a lot of sleeping, some eating, and - of course - SHOPPING.

So although I'm not the most avid of shoppers Stateside (although some may disagree), the culture of malls and shopping is so pervasive here in Singapore that it's really hard to get away from it.  Within our first few days here, Chris and I discovered that if you're in any type of metropolitan area of the island, a place to shop or eat will be within at least 100 yards, if not 50.

The main shopping area of Singapore is called Orchard Road, and the most famous of the malls is called the ION Orchard.  The mall is huge in itself (and has a giant food court in the basement, where it is totally acceptable and encouraged for anyone to eat - unlike at mall food courts in the states), but the most amazing part is that it is connected through underground tunnels and passageways to malls on each of its sides that continue for at least a half a mile.  If you walk south on Orchard from the main corner, within the first block you'll pass 2 Cartiers, 3 Louis Vuittons, and more Ralph Laurens, Swatch retailers, and Armani Exchanges than you can count.  At first glance, the sheer volume seems completely ludicrous, but the thing is: all of the malls are always crowded.  I've had to head down to that area on a Monday afternoon, a Thursday evening, a Saturday afternoon, and a Sunday morning, and each time it's been so packed with people that it's difficult to maneuver (additionally difficult if you're used to walking on the right side of hallways - they follow the British system here, which means I'm constantly running into people).  Maybe they're tourists, maybe they're expats, but it appears that people in Singapore really like to shop.


Additionally, some of the best restaurants here are located in or around the malls.  Food is very interesting in Singapore; it's all delicious, but the price distribution is bimodal - you can get lunch or dinner at a Hawker Center (an outdoor food stall area) or food court for $2-$8 SGD, but if you eat in a sit down restaurant, all prices jump to around $16-$25 SGD for an entree, and there really isn't anywhere that sells in the middle.

On Sunday, Melanie and I had brunch at a famous Taiwanese dumpling restaurant called Din Tai Fung which has 9 branches in Singapore (you guessed it...all in malls).  Their specialty is "Soup Dumplings," which are traditional pork or chicken dumplings that are also filled with delicious broth.  They come to the table steamed, and you eat them by dipping them in sauce, placing them in a soup spoon, and then poking them with a chopstick to make all the good broth come out and mix with the chili, ginger, soy sauce, and vinegar you've put on top.  They were absolutely amazing, but Melanie and I potentially ordered a bit too much food - after those, some pork shumai, a cucumber appetizer, fried rice, beef noodle soup, a red bean and rice dessert, and sesame buns, both of us were so stuffed we could barely move (see below). 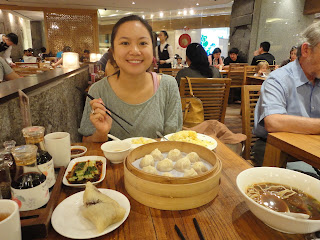 Anyway, that was it for the weekend, and now it's Monday morning and I should really be getting to work!  Exciting things in store for this week are the celebration of a coworker's birthday on Wednesday, the launch of the SUTD entrepreneurship program on Friday, and Chris and my trip to Bali this weekend.  Stay tuned!
Posted by Dara at 8:41 PM